This week i did some further testing on the colour-shifting pigment to test how different black materials took the technique. There were mixed results as seen below. All of the materials took the printing however its strength varies between each fabric. The organza shows the pattern when exposed to light but can't be seen very well in all lights. The wool hardly took the print at all, more pulls might have been needed but the texture of the fabric might play a part in why it didn't work as well. The polyester took the print well although the print does appear slightly darker on it but again more pulls might be needed. Finally the leather was by far the most successful of the 4, the material held the print well and it shows through the effect better than any other tested to date. Knowing this I can plan a design to use the colour-shifting pigment to be printed onto the leather. 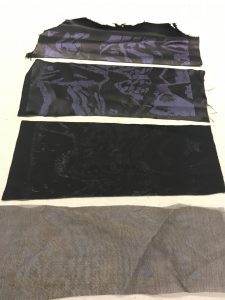 I also tried painting the thermochromic printing ink onto the digital embroidered leaves I had done the day before. The leaves were the wrong way round due to my mistake and too large to for the same pattern exposed onto the screen. As the plan was to print on top of the leaves with the thermochromic printing ink I decided to try painting it on in thin layers. The ink does react to heat well although despite best efforts it hasn't spread completely evenly onto the embroidery and so the colour change shows some the irregular surface. Its good to see it does work to paint on top of the embroidery so perhaps this is something the try printing properly on top of it later. 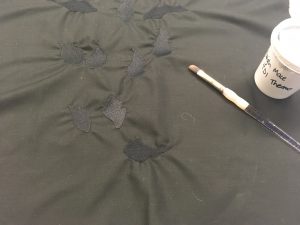 Finally i tested the photochromic printing ink however this caused a lot of problems. I hadnt realised that it was in fact a plastisol which meant that it had an oil based binder instead of a water based one. Although plastisol's are industry standard they are not permitted for use at the university as special chemicals have to be used to clean the screen. After getting help from the technicians to clean the screen I was told that I wouldn't be able to print with it and also wouldn't be able to use the glow in the dark or hydrochromic as it didn't say what type they were. I may be able to paint with these inks onto fabrics however i'd struggle to get an even layer. Other options include seeing they will allow me to use pigments mixed with a water based binder myself however i'm not sure if this would work. The samples i did print had to be heat fixed and it was suggested to do it in the heat press by holding it over the top but not shutting it. Although this dried the ink testing afterwards showed that it didn't work and there was no colour change. This could be due to not setting it as instructed as I was unable to do it at the uni. Despite the change in colour not working the contrast of surfaces does work really well so perhaps there is another way I could achieve this effect. 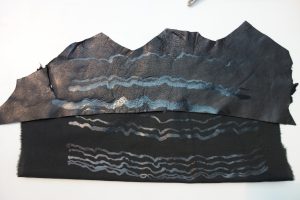