I made a start on laser cutting and engraving some design ideas this week with mixed results. The engraving of the sheer fabrics at first didn't work and was cutting through the fabric. Adjusting the settings on the machine resulted in the fabrics being lightly engraved with the pattern. The green dyed organza left a white pattern when it was engraved making it slightly more clearer however the design does have a subtle appearance. To make this idea work we made need to increase the strength so the engraving is slightly deeper or look at layering another material underneath as this seems to show it up more. 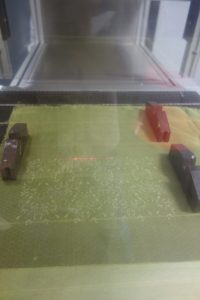 One of the designs involving cut-through and engraving caused a few problems. At first the design turned out to be wrong which was my fault, i had put in lines to be cut that didn't need to be resulting in a completely different look. Once corrected and tested on paper we first engraved the fabric with the leaves design. The image didn't appear very strongly at first so we had the machine go back over it which created a shadow effect on the surface. It was unexpected however I like to look so it is now a happy little accident that has become a part of the design, hopefully it can re-created later if I make the full scale version. 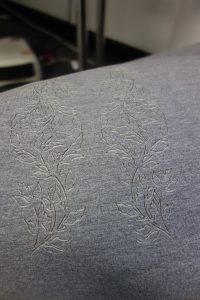 Finally I had my other leaves design cut into leather, having a small test of the shape cut first showed it was the right material use as it holds the shape well. We did adjust the layout in APS-Ethos as the individual leaves were too close together and would have cause problems with the material holding the structure. I was very happy with the outcome of this design, it works exactly as I had hoped now its a matter so texting materials underneath and textile applications to see what works best as an overall design. 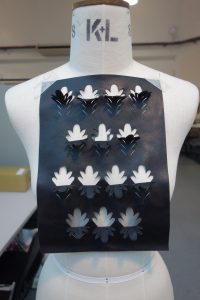