After testing the glow in the dark resin and developing some simple shapes from my visual research in Rhino and Maya I finally got the chance to 3D print some ideas. We had decided to use 1 part glow pigment to 3 part resin so started with mixing the printing resin in a cup with the pigment. It took quite a bit of mixing to get the consistency smooth as the pigment made the resin mixture thicker. Once mixed it was added to an empty cartridge and put into the machine with an older tray. As this was a new test for the machine and university we were unsure how it was going to work or if it even would but thankfully it seems to have worked really well. I was particularly grateful that the university were kind enough to pay for half of the mixture to help with costs provided they could use some of it to print their own examples with it being new to the university. The tank has to have a certain amount of resin it in to print so it had to have more resin in it than will actually to be used. It unfortunately also means that some of it will potentially be wasted if it cant be used in another way.

We decided to print solid shapes to begin with including 3 straight lines of varying lengths and 1 curved line. In addition to these we also printed 2 leaf shapes and, a screw and bolt for the uni. The mixture does clearly need shaking to re mix it before use to make sure it doesn't clog up the cartridge and that the pigments don't sink to the bottom.

The print took 3 hours and once finished had to be removed from the plate and washed in an alcohol bath.

After this the components were placed in a UV machine to set for an hour. The machine changed up the UV pigments in the components making them glow really bright when they were removed. This also proved that the process had worked with all the components glowing strongly when the lights were turned off.

The pigment had spread fairly evenly within the pieces with only the thinner layers showing some slight inconsistency. They aren't too heavy in weight either although if a lot were used in one sample it would make it quite heavy. Due to the weight I have stitched them onto neoprene and they would need to be used on a base fabric that could support their weight. 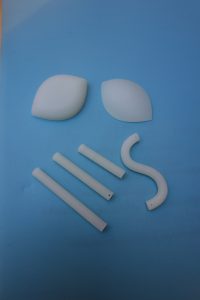 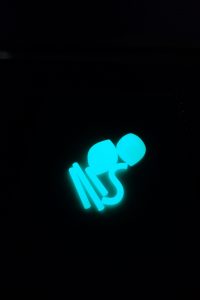 The appearance is plastic and so this needs to be considered in their use and there is a slight rough texture but I was informed they were printed on the lowest quality setting. I can see how these pieces could be used in my work and i'm excited to produce a design with the components. Next we are testing the hollow grid shapes to see how the scaffolding affects the design and whether they could be printed on this machine.