Glow in the dark tests

Glow in the dark tests

As I want to test glow in the dark pigment in the 3D printer I had to test the pigment in resin first so that I could find out how much of the pigment would need to be used. To do this I worked with Ryan to create a series of resin samples each with a different amount of pigment in them to test which would be the best to use. Each small piece would have 10g of resin and varying amounts of pigments which were 1g, 3g, 7g, 10g. We also left one piece as just resin and ended up having an extra random amount piece due to the scales not recording the weight for unknown reasons. Each piece was left to set in the cabinet in a silicon tray so they could be easily removed. After a few days I went back to check on them and put them in the oven for a few hours to set and these were the results: 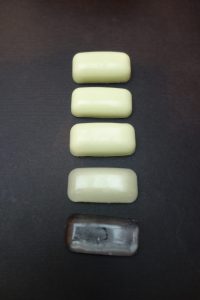 You can see the distinct different between the 1g pigment sample with the other pieces however the rest appear fairly similar. The powder did also settle a bit in the 1g sample where as the rest mixed in fairly well.

And just to prove they work: 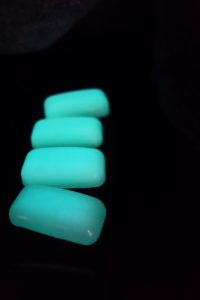 Again you can see the difference in the 1g sample with the rest appearing fairly similar in colour. I'm really pleased with the outcome, its the first time I've worked with resin and this pigment so wasn't sure what to expect. From these we have decided to use 3g of pigment to every 10g of resin this is due to the 4g sample being not too dissimilar to the 7g and 10g samples and with how much resin is needed in the machine. The next step is the buy more pigment as the 100g bag I purchased initially will not be enough and for Ryan to work out exactly how much we need to mix up to enable me to have enough resin to print with and for the machine to work. I cant wait to see how it all turns out, hopefully it will look how I want it to and not too cheap in appearance or gimmicky but I'm hoping how the pieces are used will attribute to that.