As i am not able to use the photochomric inks at the uni i have been looking at alternatives to do the same thing. The company i purchased the inks from also produces a film so i ordered some to test that. It changes from clear to blue in the daylight and works really well. The film is slightly frosty but i was thinking about how it could be used. I have the idea of perhaps sticking it to sequins which are either clear or white and seeing if it will still work then. The only issue i have currently is how it would work in the long run with the film and whether it would peel off the sequins over time. It is an idea that I would like to test and I have developed a design idea that it could work really well with. 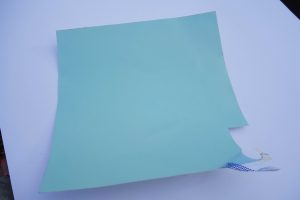