When I found out that my work had been selected to show at New Designers I started to think about how it could be displayed with Debbie. I also prefer clean, simply displays and wanted something similar for my work to not distract from the skills on show. We had talked about possibly layering the pieces slightly and whether to mix the work up. " of my collections were selected and some of the colours cross over both. It was suggested I lay the work out on the floor or tables to roughly the size space I will have to get an idea of placement before we arrived. 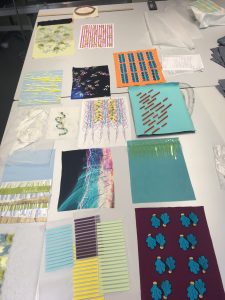 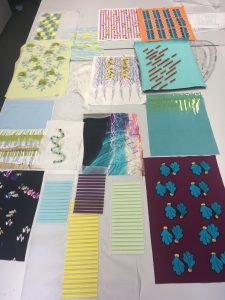 These were my 2 placement ideas looking at how the work would be laid out. I want to include as many samples as possible without it looking too crowded. The only one that isn't work well is the purple with the blue motif which i think will be left out of the display. Doing this gave me an idea of how it could be displayed at the show but without seeing the space it is hard to know what will fit.

When we arrived at New Designers I found out that I had a corner space which did slightly effect the display ideas but not drastically. I had 2 bars along the top from which to hang my work so that it could be layered up but due to needing the gap at the bottom I wasn't able to put the samples as low down as I had tested. This was the final display: 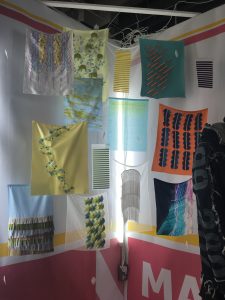 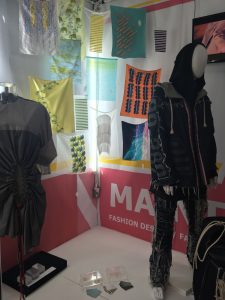 A light was placed behind my work which although helped other peoples work for mine it made it difficult to see some of the pieces and even more difficult to photograph them. we used plastic strips with the intention of holding the samples out straight but unfortunately they weren't strong enough to hold the weight and bowed slightly in the center distorting the look of the work. Finally due to lack of space a mannequin was placed in front of my work hiding some of it.  I understand that the aim was to display as much work as possible but i noticed some people are unable to see my work or assume it is part of it when i talk to them. I am a bit disappointed with this considering one of the reasons I wanted to do this course was because of the opportunity to exhibit at New Designers and I worry it wont be as fruitful as it could be if people are unable to clearly see which work is mine. There's still a few days left so hopefully it will improve and attract the attention of people.